How to Keep Erythritol From Crystallizing

Erythritol is an ideal replacement for sweeteners, and you can find it in various fruits and fermented foods. Manufacturers produce it through a natural fermentation process by utilizing Moniliella pollinia, which is an organism that looks like yeast found in beehives to create a carbon sugar alcohol, also called polyol.

People use erythritol to improve the insufficiency of other sweeteners in no-sugar and low-carb foods. However, it tends to crystallize rapidly, making it challenging to use it. Let’s find out the properties of erythritol and what you can do to prevent it from crystallizing. 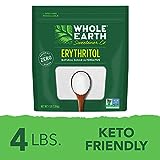 The use of erythritol helps you to have reduced sugar and calorie food, but it’s not entirely sugarless. This is because it’s sugar alcohol such as xylitol, mannitol, and glycerol, which are usually used as low-glycemic substitutes for sugars like sucrose.

Most people use erythritol as it’s well-absorbed in the digestive system, but it’s not metabolized to a certain extent and the kidneys safely filter it out while the kidneys excrete it.

The sweetness of erythritol is between 60 and 70% sweet compared to sucrose, yet it doesn’t have many calories that could affect your blood sugar and doesn’t cause tooth decay. The United States FDA states that it has 0.2 kilocalories per gram, which is less than sugar and most of the other carbohydrates.

Besides, erythritol doesn’t have lingering aftertaste found in most sweeteners including sucralose, aspartame, and acesulfame. The best thing about erythritol is the fact that it provides a smoother mouth-feel, aqueous solutions, and reduce-calorie.

Erythritol is like other polyols, meaning it doesn’t have a reducing group to cause what is called Maillard reaction. It’s suitable for use in fondant and fudge as it crystallizes quickly and it is a low soluble product.

While its crystals melt at 121°C to form a transparent non-viscous and colorless substance, crystallization of erythritol begins at 43°C after it has melted down.

Crystallization is usually rapid when it’s under static conditions. In powder form, it has transparent white and bright looks that dissolve in water to have non-viscous, transparent, and sweet-tasting solution.

As erythritol crystallizes, it has an endothermic cooling effect normally found in confections like throat lozenges and mint chewing gums. To some extent, you can reduce this cooling effect by adding inulin or polydextrose if you don’t like the cooling effect. It also lowers the water activity of food because of its low molecular weight.

Erythritol has high osmotic pressure, leading to increased preservative results and longer product shelf life. Since it’s hygroscopic, which means it doesn’t attract moisture, it can cause the product, especially baked foods to dry out.

You need to use it with other hygroscopic ingredients in the recipe. For the frozen products, its low molecular weight enables such products to have a lower freezing point.

Polyols resist fermentation by oral bacteria; therefore, they are regarded as non-cariogenic. Studies have shown that erythritol prevents oral bacteria which is responsible for fermenting carbohydrates, ensuring that the dental enamel is not harmed.

How to keep erythritol from crystallizing

The challenging thing in using erythritol is that it won’t dissolve in water evenly without crystallizing immediately when it’s cooling. Experts recommend that you should use erythritol with distilled water which has no impurities that stimulate crystallization.

If you intend to utilize it in baking, consider buying the powder because you need to dissolve the granular form in liquid or else it will remain granular. The only thing you will see is that it wants to re-crystallize once you start baking.

It’s important to be careful when mixing it in foods that get dry such as brownies and cookies because it will crystallize while it cools. There is something you can do to prevent erythritol from crystallization in such situations.

Try to use mix 1:8 containing low carb thickener to 2 tablespoons of powdered form of erythritol and 4 tablespoons per cup for erythritol in granular form.

Products with higher liquids such as pies and icing, you should not worry about erythritol crystallizing. But, to be safe, you can grind the granular form into powder if you see that it had re-crystallized while in storage.